In just over seven years as a professional wrestler, Victoria’s Chelsea Green has developed into one of the prime examples of what makes the sport of professional wrestling great. Since first stepping inside a wrestling ring in January 2014, the former Jaida has racked up accolades across nearly every promotion she’s been involved in. Whether it be during her fledgling days in ECCW or in matches with Charlotte Flair and Natalya on WWE’s main roster, Green has always had the ability to steal the show both inside and outside the squared circle. In-ring, Green continues to be one of the most innovative and entertaining wrestlers in the world today, and likely should be recognized purely based on her wrestling skill alone. However, in an industry that can often feature generic gimmicks and unoriginal characters, Green stands as one of the most unique individuals in the industry today.

It hasn’t exactly been the traditional path to WWE for Green, but for a British Columbian known by wrestling fans as the Hot Mess, could anything different really be expected?

Retweeting the #SWA success stories feels good…
I walked into Storm Wrestling Academy 5 years ago with zero wrestling knowledge. I wasn’t a lifelong wrestling fan. I had never seen a live wrestling show. I didn’t even know what a suplex was. What I did know, was that I wanted

Green’s beginnings in wrestling are well-documented; however, it doesn’t make them any less interesting. Many professional wrestlers will espouse their early love of the sport, claiming to have grown up knowing that stepping inside the squared circle was their destiny.

Not so in Green’s case.

“I knew nothing about pro wrestling. Not a thing,” said Green in an interview with 411mania in May 2018. “I had never seen a pro wrestling ring until I was maybe around grade 11. Lance Storm taught me everything that I know.”

The Storm Wrestling Academy in Calgary, Alberta is widely regarded as one of the premier training facilities in the world for professional wrestlers to have existed over the past two decades. Founded by Lance Storm, the school has produced high-level talents like Rachael Ellering, Tyler Breeze, Oney Lorcan, and countless major names in both major promotions and throughout the independent scene.

“Well, here’s the thing,” says Green. “(Lance) starts from day one from the basics and he builds from the ground up. He doesn’t try to throw you in and teach you a move before you know how to lock up, or he doesn’t try to teach you how to be a character before you even learn how to wrestle. You start from ground zero, and you build this great foundation and you just keep building on that.”

“He really is like a dad to me, and to Peyton Royce, and to Rachael, and everyone who’s gone through his school,” she continued. “He just has the best wrestling mind. There’s just no one like him out there.”

Green’s talent was evident early. A natural athlete, Green took to the sport quickly, and in May of 2014, Green debuted under the name Jaida for Vancouver’s Elite Canadian Championship Wrestling. There, she joined a who’s-who of Canadian stars on the roster including Kyle O’Reilly, El Phantasmo, Nicole Matthews, Artemis Spencer, and the Bollywood Boyz. It was a unique time throughout the province’s independent scene for both fans and those inside the business alike.

“We used to do Ballroom Brawl on Granville Street, and everyone would come and pre-drink and watch wrestling,” Green reminisced. “It was such a different crowd. It wasn’t just wrestling fans, it was sports fans. That’s what I loved about it.”

However, ECCW was far from the only promotion the then-Jaida saw herself working for in her inaugural year inside the squared circle. Thorugh the latter half of 2014, Green plied her trade across the Canadian indies, performing for VIPW, HIW, Big West Wrestling and more.

It wasn’t long Green had developed a reputation as one of the top workers in Western Canada and began gaining attention south of the border.

In August 2014, mere months after her in-ring debut, Green made her first WWE appearance as Daniel Bryan’s physical therapist during a feud between Stephanie McMahon and Bryan’s wife Brie Bella. While Green’s brief cameo on RAW was her first appearance for World Wrestling Entertainment, it wouldn’t be her last. The next year, Green was selected to appear on the 6th season of Tough Enough.

“No matter what happened, win or lose I was coming out of this experience a winner,” Green said in an August 2015 interview. “How could I not? Being surrounded by legends, superstars, and divas every day, and being able to take advice from each of them and use them to further my career was amazing. Any wrestler out there would kill to be in this position, I wanted to make sure I took full advantage of it.”

Green entered the competition in the show’s fourth episode, replacing Dianna Dahlgren, who had left the competition the week prior. In her short time on the show, Green made a major impact, winning two competitions in her four appearances. Despite a strong showing, Green was eliminated in the season’s 7th episode, finishing in 4th place among females.

While Tough Enough may not have landed her a WWE contract, it wasn’t long before Green reappeared on the independent scene in a major way. In 2016, Green made her first two tours of Japan. While the first was cut short due to a broken collarbone, Green’s second stint in the far east saw her break out on the worldwide stage in Stardom. Through her first tours in Japan, she was undefeated in singles action, eventually earning a championship opportunity against then-WWRS Champion Kairi Hojo, known in her time in WWE as Kairi Sane. Despite the loss, the time in Japan was hugely influential.

“I still didn’t really know what I was doing,” said Green in 2018, “but with the language barrier over in Japan, they don’t know that you don’t know what you are doing, so every crazy move that I wanted to try, they were like, okay, let’s try it. That is how my confidence and move sets grew by trying things that I wouldn’t have tried had I been here in the United States.”

That confidence translated into a contract with Total Nonstop Action (TNA) in June of 2016. Making her televised debut as Laurel Van Ness in September 2016, Green defeated Madison Rayne in her first match before immediately entering a feud with Allie and developing a relationship angle with Braxton Sutter. It was during this storyline that Green would develop into the character that would gain her worldwide notoriety, the Hot Mess.

Wedding angles are always a risk in wrestling, but the – heh, impact – of the February 23, 2017 storyline union between Van Ness and the aforementioned Sutter will likely go down as one of the best in the genre if not for it’s standalone content, then for its repercussions. Van Ness’ slow descent into madness following Sutter’s shocking wedding betrayal was a highlight through each episode of IMPACT, and watching the Hot Mess develop weekly was a clinic in character development. Her weekly appearances became must-watch, and fortunately, the wrestling world began to take notice. By the end of the year, Green’s character shift and aggressive new attitude in-the-ring led to her first IMPACT Knockouts Championship. It was a fitting conclusion to her tenure with the company; within months, Green had left the promotion and become one of the most in-demand wrestlers in the world. 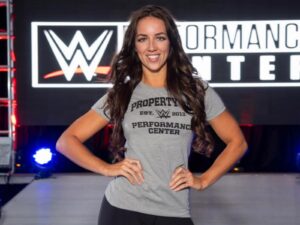 “I guess with me, I set my sights on what I think is the top,” Green has stated on her goal of working for WWE. “I always pick a goal, and I can not get off of that track for that goal.”

Frankly, Green’s signing with WWE always felt like an inevitability to many fans. However, it wasn’t as though the former Jaida was cooling her jets on the independent scene waiting for a contract. Green turned heads with appearances on Lucha Underground as Reklusa and at the record-setting All In mixed in with her Knockouts Championship reign.

Finally, on October 17, 2018, Green was confirmed to be among the class reporting to the WWE Performance Center. Merely nine days later, on October 26, she took part in her first match under the NXT brand against long-time friend Deonna Purrazzo. Shortly after, the pair aligned with another graduate of the Storm Wrestling Academy, Rachael Ellering as VXT.

“VXT was just a short version of the word ‘vexed,’ which Rachael Ellering came up with. She saw it and pitched it to Deonna and myself, for the three of us to be a strong, badass, Charlie’s Angels-type of group.”

Though Ellering was rehabilitating from an injury at the time, the faction looked poised for success out of the gate. Green and Purrazo were given a patented in-the-crowd shot on the second-ever live NXT on the USA Network. It was the first of many hints that WWE knew exactly what potential stars it has in the pair.

Unfortunately, a broken wrist sustained in March 2019 kept Green out of in-ring action for the better part of three months. Though it did delay any potentially impending plans for VXT, it certainly didn’t appear to diminish the former Hot Mess’ star potential in the eyes of the WWE brass. Only a few short months after returning from her injury, Green made her Monday Night RAW debut on the brand’s 2019 Christmas episode, where she looked more than equal to the task in facing off with Charlotte Flair.

“I was a little bit nervous,” Green admits of her WWE debut. “I went in, and I tried not to think about who it was or who that name was. But, you know, I was nervous for my debut and everything.”

Evidently impressing the WWE brass, Green made her official NXT television debut just over a fortnight later accompanied by Robert Stone. For four months, Green was consistently featured across NXT programming, taking part in a critically-acclaimed ladder match and teaming with old rival Charlotte Flair against Io Shirai and Rhea Ripley. It was following that match that Green ‘fired’ Stone and looked primed to make the move to RAW or Smackdown. However, it was a few months before her eventual official debut. Rumours flew that Green was part of the then-fledgling RETRIBUTION stable – “No, people are totally lying with that,” she refuted – but it wasn’t until November that her call-up came to fruition.

On November 13th, Green made her debut on Smackdown Live, marking her official move to the main roster of WWE. In an eerie parallel to her first match at Full Sail University, Green sustained yet another wrist injury, keeping her on the shelf for the foreseeable future. However, injury notwithstanding, it’s yet another step forward for Victoria’s finest.

“I’m so proud to be Canadian, and I’m so proud to not only represent Canada but represent the island that I’m from,” Green finished. “Not many crazy things happen in Victoria, BC, but one of them would be that there’s a professional wrestler from Victoria!”

Hello! Here I am!

This website uses cookies to improve your experience. Not the tasty kind of cookies, mind you, but certainly helpful ones. Opt out if you wish! Accept Read More